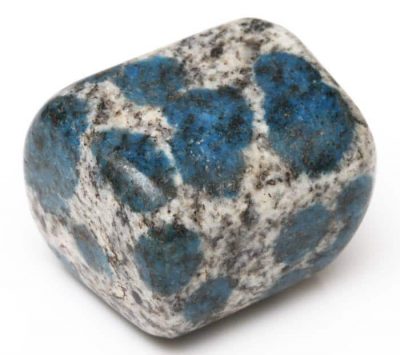 K2 Stone is the name given to a newly discovered stone found in the foothills of the second highest mountain on Earth, K2 in the Karakoram mountain range which borders Pakistan and China. K2 Stone is a combination stone characterized by vivid blue or green “spots” in a mottled granite matrix. There is divided opinion as to the blue/green mineral, some sources say it is Afghanite whilst others say Azurite and the green Malachite (both copper based minerals).

Afghanite, named after the country where it was first discovered, is a complex mineral that contains the elements sodium, calcium, potassium, silicon, aluminium, sulphur, chloride, carbon, hydrogen and oxygen. Afghanite was discovered in a Lapis Lazuli mine and many of the elements found in Afghanite are also present in Lazurite a major constituent of Lapis Lazuli. The name Lazurite is often confused with the name Lazulite, and Lazulite is a synonym for Azurite so may be this is adding to the confusion too. (Just a thought!)

However K2 Stone is a rare, unique stone whatever the mineral make up, allowing one to reach the highest “peaks” of consciousness and grounding energy into the third dimensional reality.

The frequency of K2 Stone connects to the third eye chakra, opening this chakra and one’s consciousness to see the “bigger picture” of one’s life’s experiences. Giving one a higher awareness and to have clarity of thought to enable one to clearly see and know what is “right” for one.

The energy of K2 Stone opens one’s consciousness to receive guidance from the higher dimensions which enables one to make decisions in one’s highest good.

The granite matrix acts to ground the higher energies so that one’s thoughts can manifest in the third dimension.