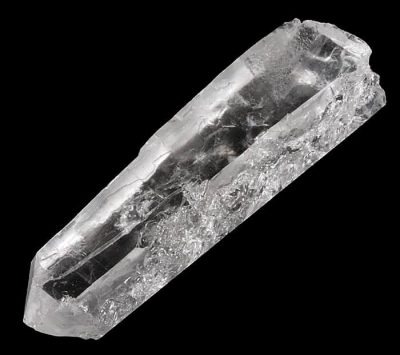 Lightning Strike Quartz is a rare form of Quartz crystal, also known as Lightning Quartz, often as a laser, that have characteristic irregular markings that appear to be “scratches” or deformities on the surface of the Quartz. These markings are caused by the energy of a lightning strike on individual Quartz crystal points. It has been found on the Diamantina Plateau in the Bahia state of Brazil and the nearby Minas Gerais region in Brazil.

The frequency of Lightning Strike Quartz connects to all of the physical and transpersonal chakras. Its high vibrational energy balances and aligns all of one’s chakric system and energy fields, cleansing all of one’s energy fields of negative, discordant energy and raising one’s vibrations to a higher level. The laser shape directs the energy in a precise and focussed manner so that the energy can be moved and transferred causing a rapid energetic response.

The vibrational energy of this rare Quartz allows one to be open to higher dimensional energies so that one can easily and quickly acknowledge and release deeply help emotional patterns at a cellular level, which helps one to be able to move forward on one’s soul’s path in this lifetime.

Lightning Strike Quartz can enable one to connect to others by focussing one’s thoughts, so that via the group consciousness, one’s higher thoughts and feelings can be understood by others.

Shop Temporarily Closed Apologies in that we have not re-opened earlier. Trudi had an accident a few weeks ago and is now recovering albeit slowly. We hope to be up and going again early in 2022. If you have an urgent query then please use the Contact Us page. Dismiss