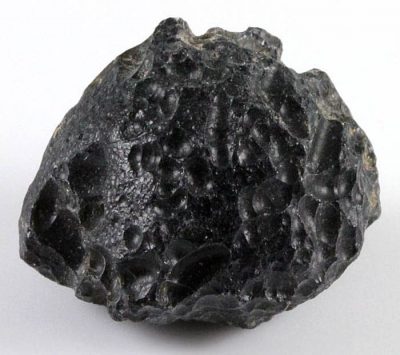 Tibetan Tektite is the name given to a black and brown/black Tektite found in Tibet and southern China.

Tektite is the name given to a glassy material which is the result of an extra-terrestrial meteorite impact on the Earth’s surface. The terrestrial material (rocks/sediments) at the impact site either melted, vapourized, or both and were ejected into the Earth’s atmosphere. Subsequently, molten material re-entered the Earth’s atmosphere and cooled rapidly but scattering far from the original impact zone, these are know as “strewn fields”.

Tektites are found in various shaped forms as spheres, teardrops, dumb-bells or layered, often containing vesicles or bubbles, formed by either gas or steam during the solidification process.

The frequency of Tibetan Tektite connects to all of the personal and transpersonal chakras, opening the whole of one’s chakric system and aligning one’s energy fields, so that there is a free flow of energy throughout one’s being. The intense cleansing energy of this Tektite helps to remove all energetic blockages and stagnant energy, increasing one’s frequency to an extremely high vibrational level.

Tibetan Tektite expands and open one’s consciousness to other dimensional frequencies and realities, expanding one’s awareness to encompass “all that is”.

Scroll back to top